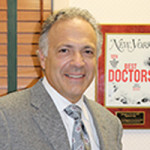 Dr. DeLuca grew up in Westchester County. He attended Iona Preparatory School in New Rochelle where he was a regent scholar. He went on to Fairfield University where he graduated with honors. He attended Rutgers Medical School, which is now the Robert Woods Johnson Medical School. Dr. DeLuca supported his education through outside jobs and student loans. It is of note that he was only one of two students to be accepted as an out of state resident to Rutgers Medical School at the time.

Dr. DeLuca attended the Affiliated Eye Residency Program where he was elected chief resident in his final year.

He received the Irving Shulman MD Memorial Award for “Exemplary Compassion and Medical Expertise” and the “Award of Excellence in the Surgical Education of Residents.” He has been featured in several newspaper articles, and magazines, among them The New York Time and The Star Ledger. Dr. DeLuca has been elected to every Best Doctor list year after year. These include New York Magazine, Americas Top Doctors, Best Doctors, and Inside New Jersey Magazine. He published a number of professional articles early in his career and continues to be on the cutting edge of new ophthalmic medical and surgical innovations.

Presently his interests lie in the area of premium intraocular lenses for cataract and lens exchange surgery. Dr. DeLuca is the foremost authority in this area. Laser vision correction and corneal transplantation also continue to be his forte. He is a member of the Crystal Lens Center of Excellence.

His outside interests include skiing, golf, tennis, fitness, and watching his two boys grow up. He and his family currently split their time living between Ridgewood, New Jersey, and Manhattan, New York.